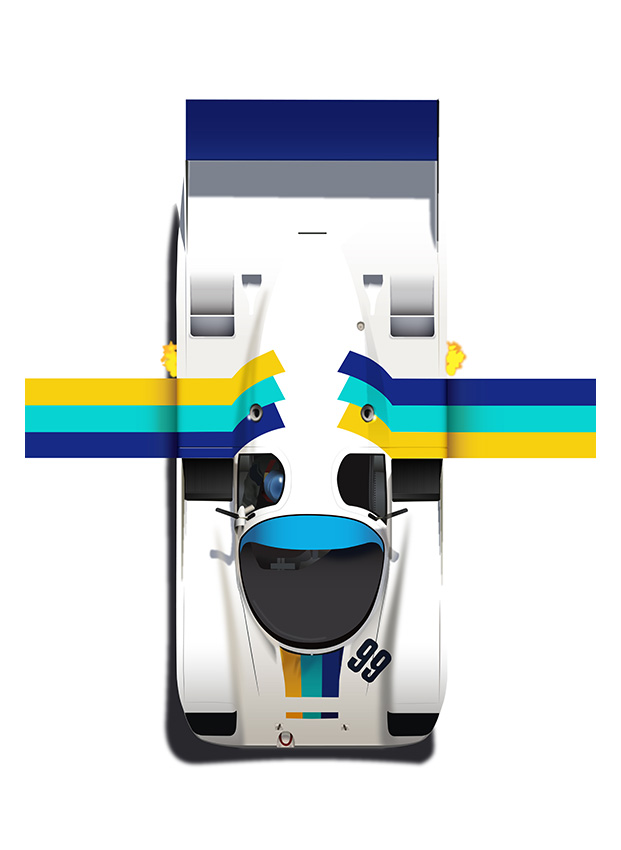 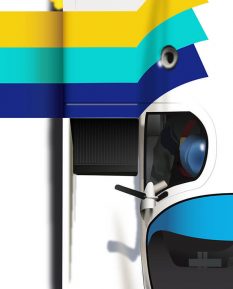 Meet one of the most successful racing cars that Porsche ever creates. Its almost 10-year racing career is an accomplishment to be proud of. We can’t recall other modern racing cars with a lifespan longer than this. Porsche 962C GReddy poster print presents artist Pete Dials' minimalistic artistic perception of the car.

The story of 962 begins with Porsche 956, which debuts in 1982 for the then-new Group C category of top endurance racing. The car has huge power and low drag. This combination is more than enough for the Porsche to strike its first Le Mans win. It reaches a speed of 235 mph/h in its debuting season at the Mulsanne. Welcome to the era of Group C!

And it is not only Mulsanne. Porsche 962 wins spectacular titles all around the world. For its record life span, the car has legendary pilots like Mario, Michael and John Andretti, Tiff Needell, Derek Bell, Henry Pescarolo, Gary Brabham, Hans-Joachim Stuck and last but not least – Jacky Ickx. Porsche produces 91 962 cars in total in different trims. All of them are powered by an air-cooled 6-cylinder boxer engine with a different kind and stage of turbocharging.

Porsche 962 is such a pleasure to drive that Derek Bell, a 5-times Le Mans winner who drives 962 to 21 victories between `85 and `87 calls it “a fabulous car”. The factory racer Hans-Joachim Stuck says that “Porsche 962 is the best race car that I ever drove. Brute force and unbelievable ground effects. The centrifugal forces were enormous, and there was no power steering. You needed the strength of a bear and a lot of courage.”

The Greddy-livered Porsche 962 in this poster is from the car's last years, just before FIA bans the turbos in competitions. It looks like this car is so good it has to be banned.