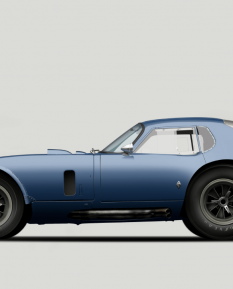 This is the same old story of David vs. Goliath.  This time was Shelby who stood up against Ferrari and some other European manufacturers.  The Shelby Daytona Coupe poster from above is dedicated to the glorious racing success of Carol Shelby's creation.

Back in the 60s, Carol Shelby's Cobra has already made its name. At the time he made quite an impression among the public with its powerful V8 Ford engine. However, due to its roadster body type, it had the aerodynamics of a brick. Hence less powerful cars like the Ferrari 250 GTO and Porsche 904 were significantly faster. As you guessed a coupe body was needed and the Shelby Daytona Coupe was born.

The design of Shelby Daytona Coupe is credited to Pete Brock although he was consulted by the aerodynamics experts of the aircraft manufacturer Convair. They proposed the Kam-tail design, which proved to be a perfect fit for its high-speed goals. The Daytona Coupe managed to reach 190 mph equal to 310 km/h.

Brock started to prototype using scrap wood and gaffer tape, followed by the design of the windscreen, which was the first element manufactured for the car. Then he placed interspaced wooden formers and hand-built aluminum body panels. This is how the first example of the Shelby Daytona Coupe was born. Carrozzeria Gransport built five more in Modena, Italy.

The Shelby Daytona Coupe is a racing hero.

Just six Shelby Daytona Coupes were built between 1964 and 1965. It happened after Carol Shelby was reassigned to the Ford GT40 project, aimed to beat Ferrari after their dominance at Le Mans in the prototype class. During seasons '64 and '65, Shelby Daytona Coupe raced in GT Division III, a compound of racing cars with engines over 2000 cm3. And it was an instant success in the endurance racing. Under its belt, Shelby Daytona Coupe registered a few land speed records at the Bonneville salt lake. The Shelby Coupe won in its class at 12 Hours of Sebring, 24 Hours of Le Mans, RAC Tourist Trophy, 24 Hours of Daytona, Italian GP at Monza, Nurburgring 1000, etc.

This Shelby Daytona Coupe poster might be yours as a perfect art print or as a poster print, designed by Stamatis Tsirdimos and carefully issued by Simply Petrol.