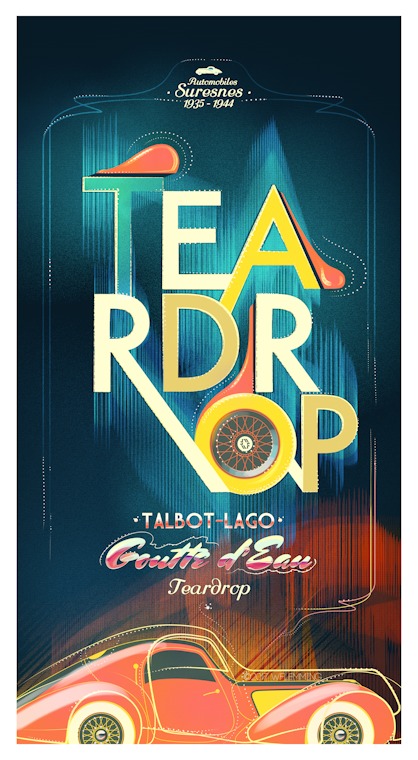 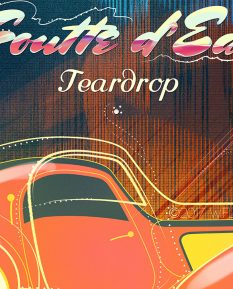 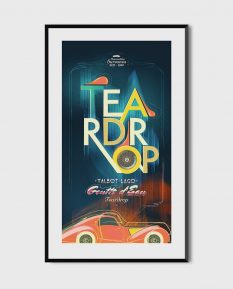 Talbot-Lago Teardrop coupes are the epitome of automotive art deco and took over the world with fluid lines and aerodynamically enhanced speed. W.Fleming is sharing again their story with this beautiful poster artwork.

The rise of Talbot-Lago began with Antonio Lago who managed to buy the Suresnes factory, built by Darracq. He managed to get a reasonable stake and added his name next to the Talbot brand. The next step of Toni Lago was to hire Walter Brecchia as chief engineer. His first task was to upgrade the existing Talbot T120 to T150 with radically new hemisphere cylinder head for the 3-liter engine. Born and raised in an artistic background, Antonio Lago was familiar with vanity and generated a lot of attention by building 3 demo cars painted in white, blue and red – the French tricolor. Under the hood was the old T120 engine, since Brecchia needed time for his development.

When the new engine was finally done, it was produced in different versions after different chassis modifications. The 4.0-litre six-cylinder engine with three Zenith-Stromberg carburetors was capable of 160 or 190 hp, depending on the size of carburetors. The car was really fast and easily reached 200 kilometers per hour. One of them in almost stock condition finished 3rd in 1938 24 Hours of Le Mans. The year before, T150 was the fastest car in British Tourist Trophy, Tunisia and Marseille.

Talbot-Lago produced less than 30 Teardrop coupes. More than the half were bodied by Figoni and Falaschi. Marcel Pourtout, notable coachbuilder completed series of 4 chassis, known today as Pourtout Aerocoupes. They were designed by Georges Paulin, French dentist with bold design ideas heavily influenced by aerodynamic stream lines. He is also known for inventing the first folding hard top.

Paulin & Portout Aerocopues of Talbot-Lago were pretty close to Figoni and Falaschi design. They kept the Teardrop shape and put it in a more aerodynamic context in order to achieve better efficiency, hence speed.