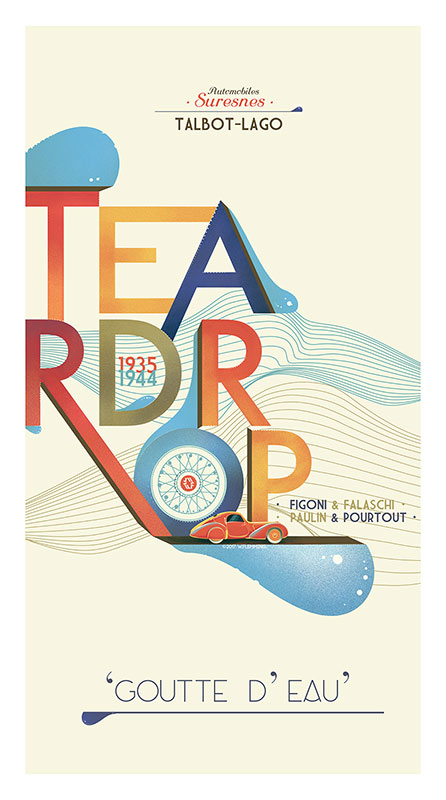 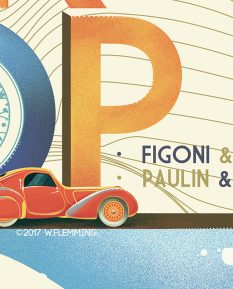 Automotive art is what the Talbot-Lago Teardrop coupes are emitting then and now. And this beautiful poster artwork by W.Fleming is telling their story of fluid grace and inherent motion like nothing before.

It all begun at Suresnes, a Paris district where Alexandre Darracq built his automotive factory in 1896. In 1912 he decided to sell his business. 10 years later, new owners of Suresnes factory renamed it to Automobiles Talbot. Because there was also British Talbot cars, French ones were badged as Talbot Darracq.

In the early 30`s, right after the Great depression, a new manager was appointed in order to invigorate the business and to revive the heritage. His name was Antonio Lago and he successfully completed a management buy-out of the company which then was under receivership. Meanwhile, he started to change the company and this very change started in 1933.

Toni Lago not just had a sense of excellent engineering, he was capable of creating it. This is what happened with Talbot-Lago T150 – sports car build on a racing car chassis which was mated with the most beautiful art-deco handmade coupes. Toni Lago made a deal with Figoni and Falaschi coachbuilders for short series of stream-lined bodies for T150.

This is how the Teardrop or Goutte d’eau coupe shape was born. Figoni and Falaschi turned the automotive world upside down with their fanciful curves and sensuous lines. The exuberant French coachwork turned the cars into a form of art leaving behind their largely functional forms of the 20`s and 30`s. Just 16 Talbot-Lago teardrops were produced in two series. There were some differences like two were built with skirted fenders, others were equipped with bullet-like headlamps while others featured front lights behind chrome grilles.

4 more Talbot-Lago T150 were built but their body were designed by Georges Paulin for Marcel Portout, a popular French coachbuilder at the time. More on this story in Talbot-Lago Teardrop II poster print.