Porsche 917 is destined to conquer Le Mans. It becomes clear that the Germans are here to stay quickly after Porsche enters Le Mans as the first carmaker from the Bundesrepublik. Their first endeavour on the 24-hour race is with 356, which is also Porsche’s first-ever road car. In the following years, they build more cars and sometimes they are intentionally designed to compete for the World Manufacturer’s Title.

After FIA announces a class of “homologated sports cars” Porsche fires up a new project – the 917. The new regulations for the 1969 season set the minimum weight to 800 kg and up to 5 litres cubic capacity for the engine. Just after Porsche finally produces a bigger engine, a new one has to be developed – the 3-litre flat-8 for the 908 for 1968 season. The new Porsche 917 has a larger 4.5-litre 12-cylinder engine with horizontal cylinders. Unlike the 908’s boxer crankshaft, the 917’s engine uses a shorter crank similar to those in “V” engines to reduce the motor’s footprint. 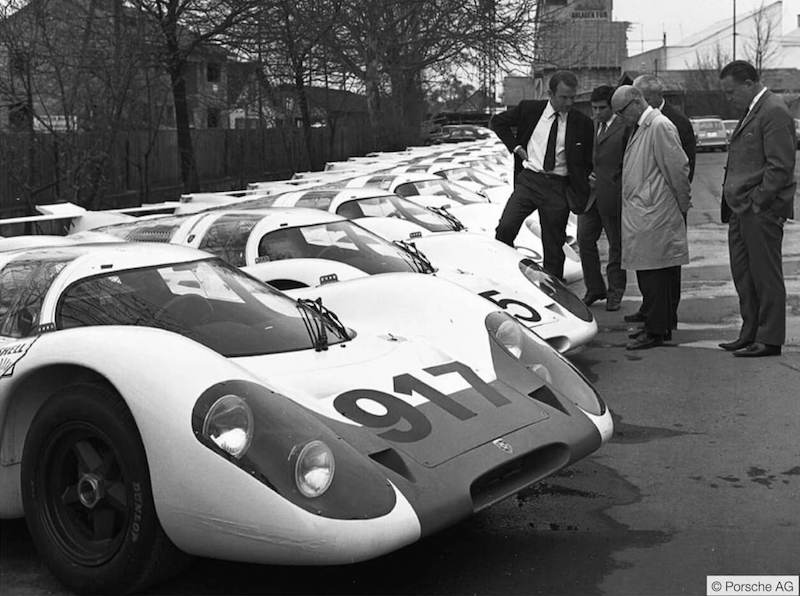 1969 April 22. F. Piech on the left, Helmut Bott on the right. FIA officials Herbert Schmity and Dean Delamont in the middle. 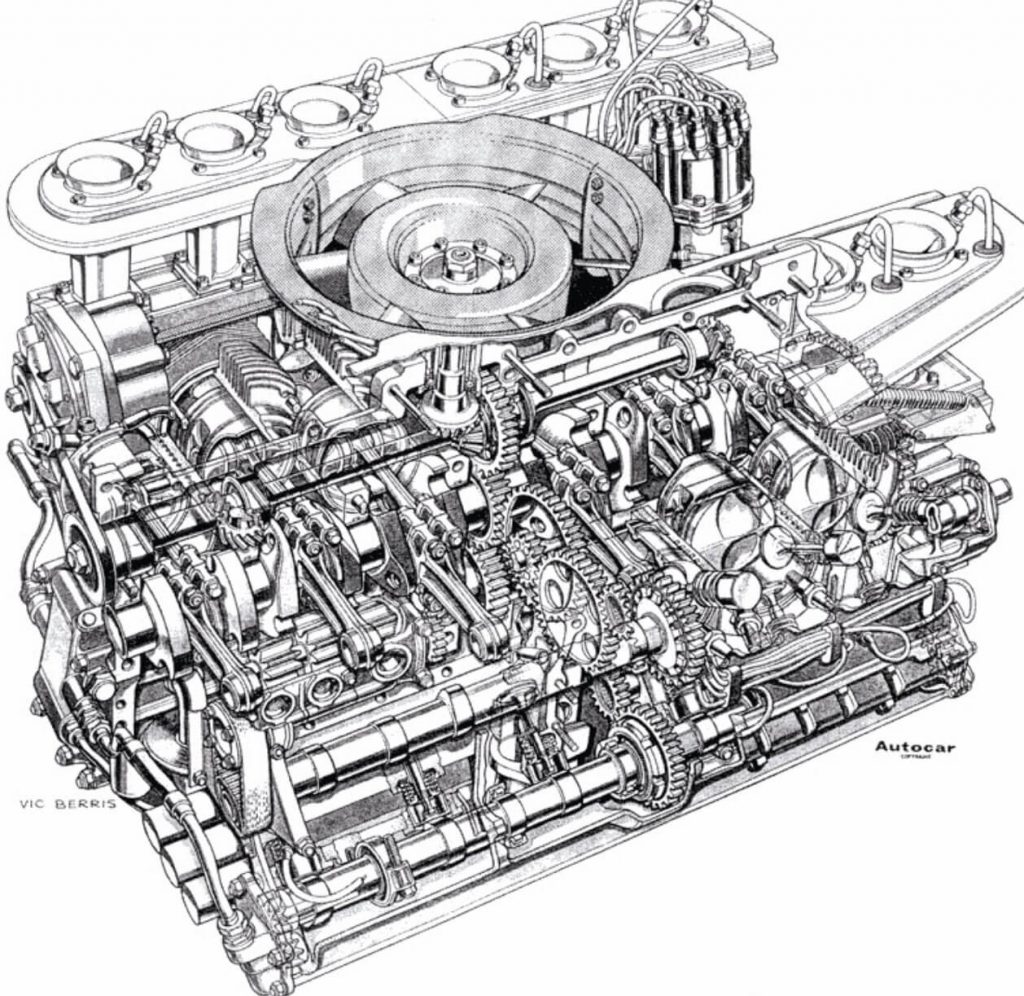 The racing engineers of Porsche decide to develop two body shapes designed to achieve better results on shorter, twister road tracks or on more open tracks with fast and long straights. The 917K has a shorter tail or Kurzheck in German (it is where the K comes from). Porsche 917 LH with the long tail (or Langheck) is explicitly created for the Le Mans race. They prove they are unbeatable at the straights during the night testing just before the 1971 start. Jackie Oliver drives down at the L´Hunnadieres straight with 396 km/h.

The racing debut of the 917 is at the 1000 km of Spa. Jo Siffert, leading Porsche driver at the time, goes out on the track but declares to the engineering team that ”this car is not only unstable, but it is frankly dangerous “. The Porsche 917 does not behave well neither in quick curves, nor in straight lines. “Seppi” Siffert is the only pilot who has the option to choose and he goes for the 908 Long Tail that has been already tested and approved. Only two 917 cars enter the race and although they set the fastest time in qualifications and the Lolas, none of them makes it to the finish line. 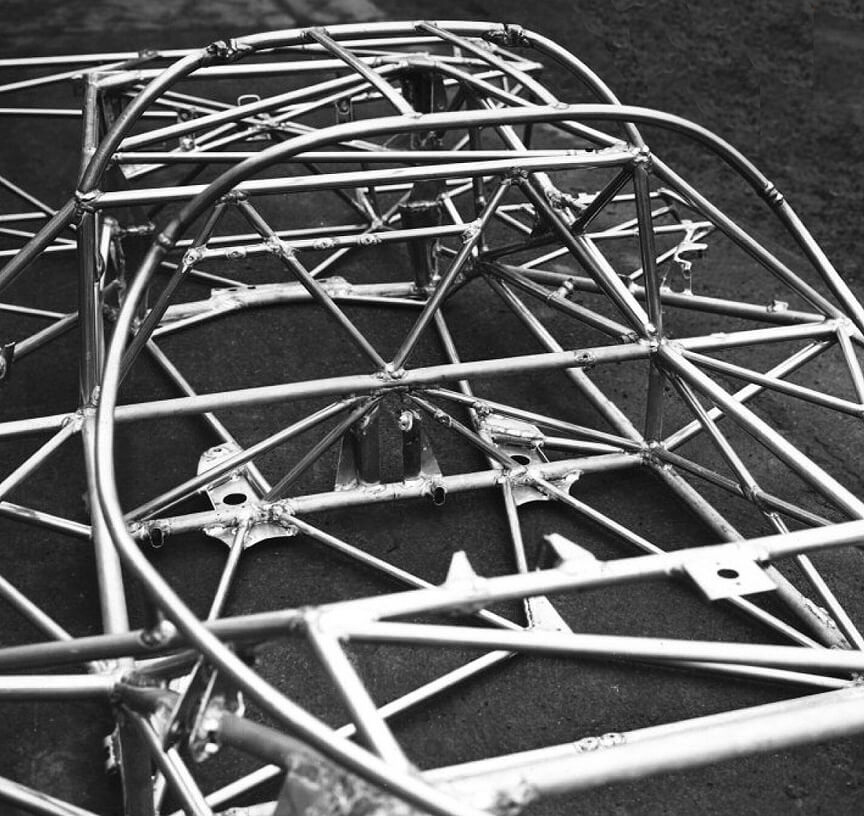 Frame was pressurized with compressed air, so a gauge would show if the frame would get a crack during the race. 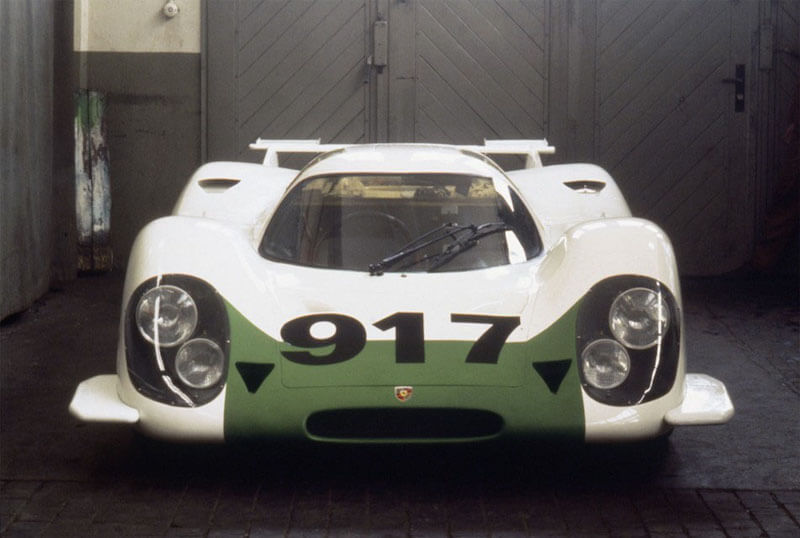 917s are the fastest at Le Mans later that year and set the quickest lap time during the race with drivers Vic Elford and Richard Attwood. Unfortunately, the car has to retire from the leading position because of clutch failure.

The only private 917 in the race this year is driven by the Englishman John Woolfe. He crashes at the first lap and gets thrown out of the car. Unfortunately, the accident has a tragic end and Woolfe loses his life. This is one of the main reasons for changing the traditional LM-style start with drivers running across the race track, entering the cars, starting the engines, fastening seat belts and driving away. In reality, almost every driver takes off without a seatbelt on and fastens it during the first laps. 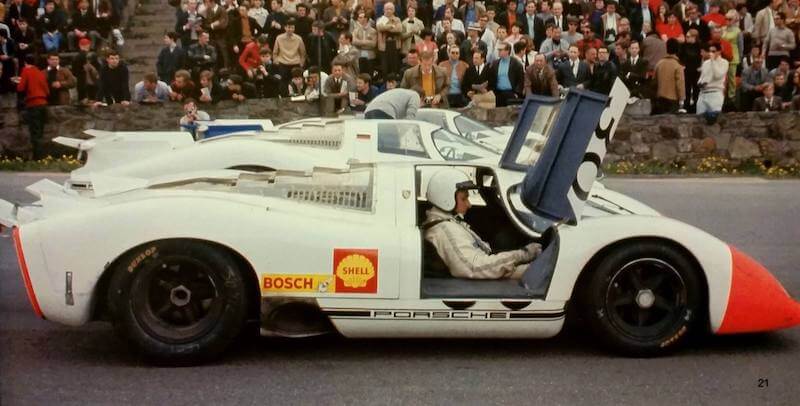 For the following season, Porsche agrees to collaborate with John Wyer Engineering. The American JW team becomes a factory team. It is a tremendous season for Porsche – the brand not only dominates the tracks around the world but also becomes a successful business case. All cars from the previous year follow the 1970 specs featuring new 4.9- and 5.0-litre engines. The smaller capacity engine turns out to be unreliable at longer distances. That season the plastic cover above the engine gets removed and new aerodynamic changes are made to generate downforce instead of the unintended lift. Two Long-tails are ready for the Le Mans start.

Almost half of the cars at the starting grid are 917s. Wyer is surprised to discover that another team has been carefully preparing for the 1970 24 Hours of Le Mans with close support from Porsche. This is the Porsche Salzburg team that is under the Porsche family guidance as in 1969. The Martini Racing team also gains support from Porsche AG. It looks like Porsche really wants to win this time. 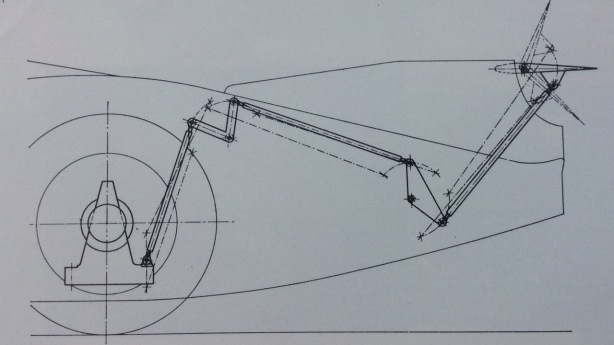 Porsche factory drawing showing how suspension deflections actuated the rear wing flaps, from full to no downforce. Movable aero devices banned by the FIA from the end of Le Mans ’69. Changes to bodywork design obviated the need for the flaps in both short and longtailed forms in 1970/71. (Porsche AG) 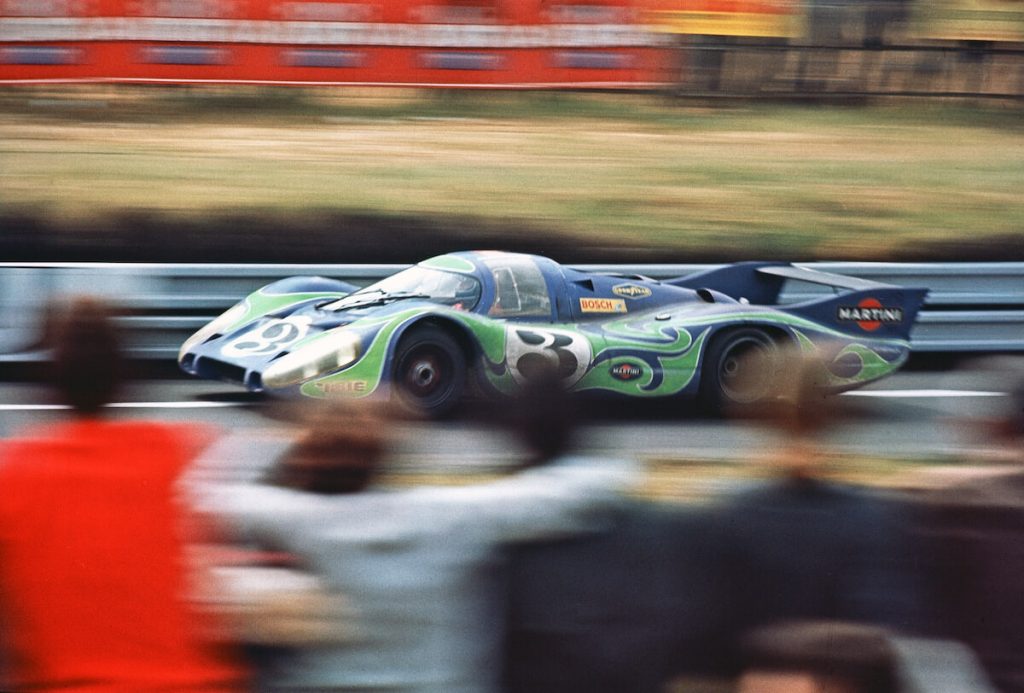 The Moment of Truth

Two 917 LHs enter the 1970 race, оne with the 4.9-litre and one with the 4.5-litre engine. The 4.9-litre LH starts from pole position. Unfortunately, the engine doesn’t endure the 24 hours effort and drops an inlet valve after 225 laps. The other Martini Racing 917 LH 4.5 finishes second with Gérard Larrousse/Willy Kauhsen behind the wheel. Because of the car’s livery, it is nicknamed the hippie-Porsche or the psychedelic-Porsche. Interestingly, this isn’t the only psychedelic 917. A short-tail version 917K is also made for the Watkins Glen 6 Hours.  The livery is designed by the Latvian Anatole ‘Tony’ Lapine, who is the head designer at Porsche. He will later design the livery of the 71’ Pink Pig as well.

The moment of truth is here. Despite the heavy rain Porsche 917 wins with drivers Hans Herrmann-Richard Attwood from the Porsche Salzburg team. Their short-tail #23 at 917K model in red and white stripes obtains the first victory for the marque in the most critical test of the Championship. 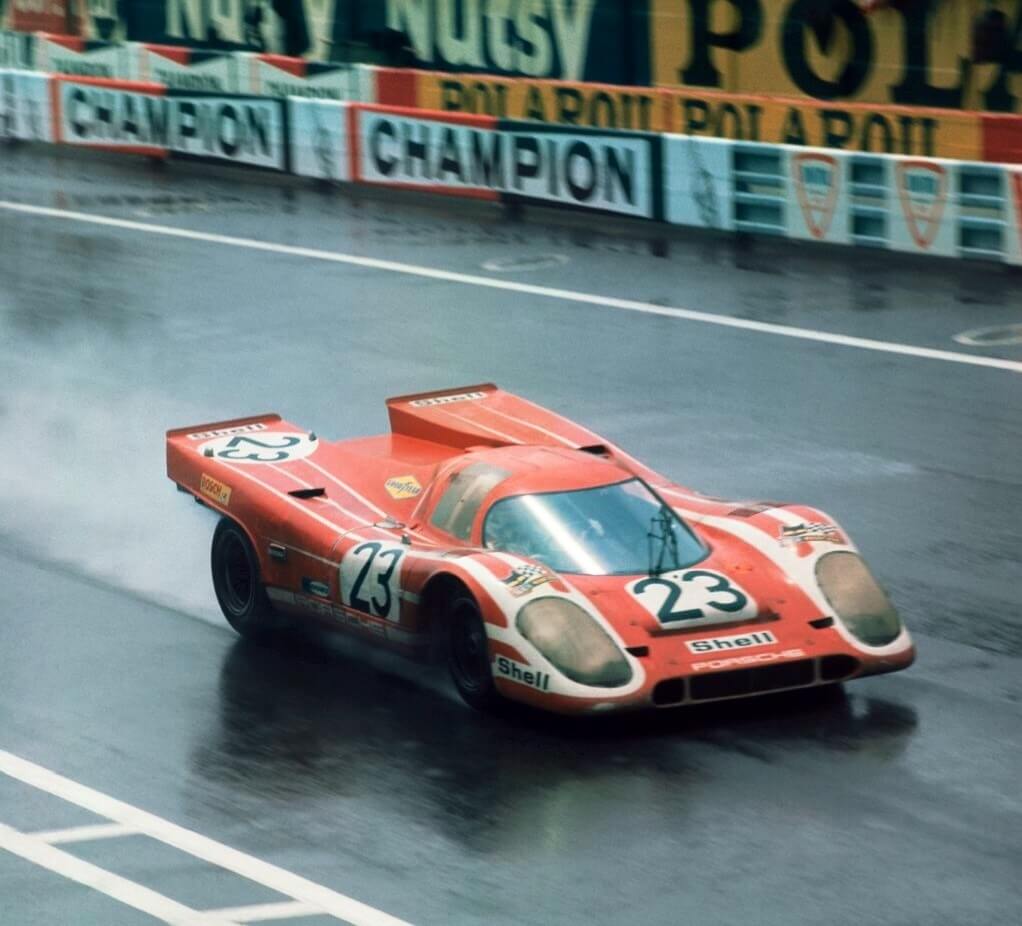 Porsche Salzburg Le Mans-winning Hermann/Attwood car. Shot included to show the changes made to the body of the car work very late in 1969; different door line, no exhaust exits aft of the doors, wedge shape and Lola inspired rear deck.

Porsche not only wins Le Mans that year but also helps Steve McQueen film a legendary motorsports picture. The movie Le Mans is filmed between June and November 1970 on location at the Le Mans circuit. It includes scenes from the actual race in mid-June as well. McQueen intends to race a short Porsche 917 together with Jackie Stewart, but the entry of the #26 does not get accepted. Instead, his character starts the race in the blue #20 Gulf Porsche 917K driven by Jo Siffert and Brian Redman.

917K finishes the campaign winning seven out of the eight events it enters. The Wyer cars are unbeatable. The engineering superiority is obviously on Porsche’s side. In 1970 Ferrari makes numerous improvements to its cars, but none of them brings any substantial results. For Porsche, the original production series of twenty-five 917s cannot satisfy the demand. Over 50 chassis are built in total. An underdog for 20 years, with the 917 Porsche turns into the new leader of sports car racing.

New competitоrs arrive for the new season. Along with the Alfa Romeo T33/3 which wins Brands Hatch, Roger Penske is one of many that buy a used 512S chassis from Ferrari. He has some ideas for modifications on his mind. The blue and yellow Sunoco-sponsored Ferrari is tuned for long races. It receives a new aerodynamic wing at the back and an engine overhaul by a Can-Am V8 specialist Traco. It is capable of more than 600 hp. Sadly for Penske, the team does not receive any help from Ferrari. Although they record good lap times and high speed at 24 Hours of Daytona and 12 Hours of Sebring it just isn’t good enough to be a serious contender for the 917 racing armada.

917 is further improved for the season with vertical fins for stability at high-speed cornering. The new frame is also refined. The chassis is made from magnesium and is lighter, yet extraordinarily flammable and dangerous in the instance of fire. 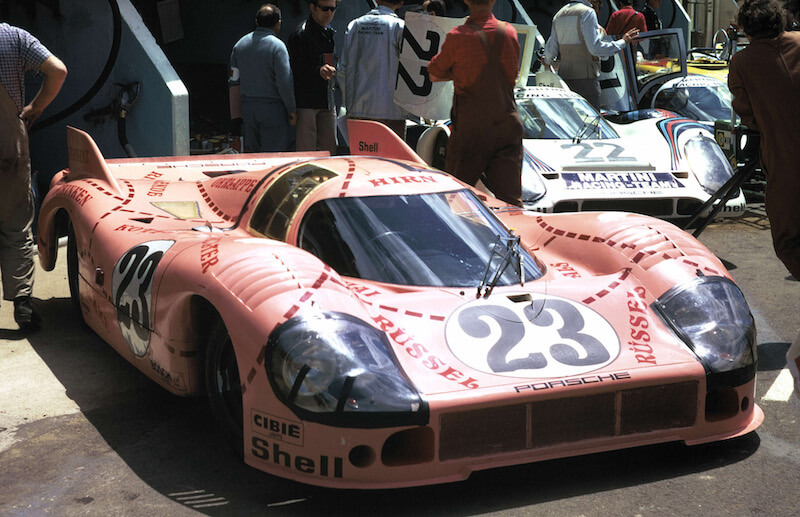 The idea to paint it like a pig came from the Porsche design manager Anatole “Tony” Lapine.

A concept car is specially developed for Le Mans. The Porsche 917/20, also known as the Pink Pig or The Trufflehunter of Zuffenhausen (“Der Trüffeljäger von Zuffenhausen”) has new aerodynamics and parts to be tested for the Can-Am series. The body of the car is much wider with a tail somewhere in between the K and LH versions. They want to achieve the smaller drag and the top speed of the original Long-tail (“Langheck”). Surprisingly the 917/20 makes it through the qualifying with the seventh-best time but doesn’t see the finish flag.

Once again it is not the LH that wins Le Mans. It is the white-blue Martini Racing 917 K with Gijs van Lennemp and Dr Helmut Marko behind the wheel. Their win also sets a new average speed record of 222 km/h and a total of 5,335 km driven. This record still stands today, but it is is important to note that a few changes have been done to the circuit since 1971. 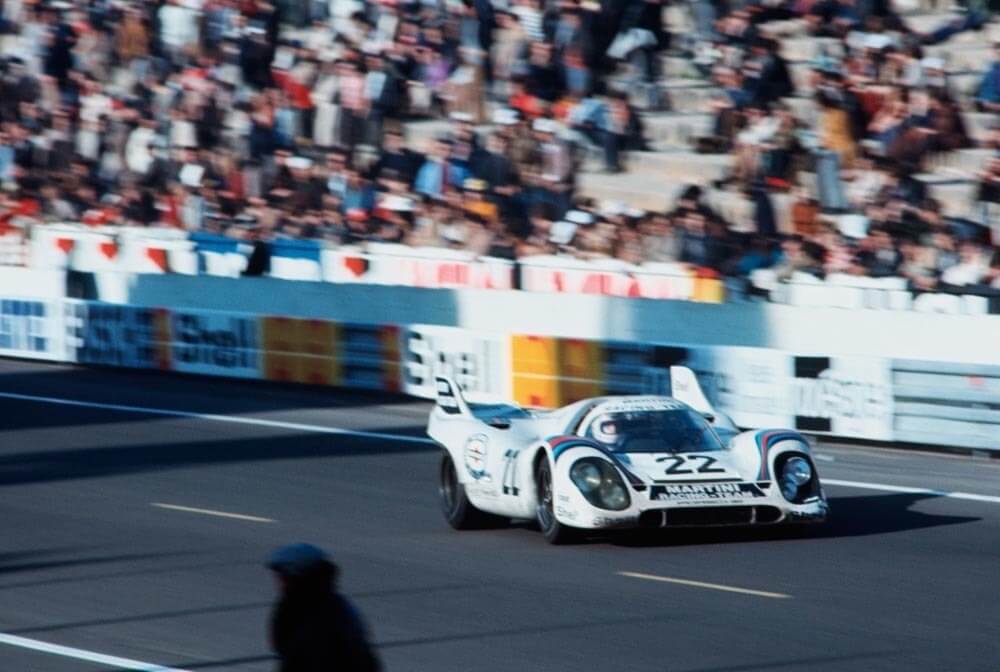 “We race because it’s our tradition and has been since my father was involved in it. But also because, in my opinion, there is a lot of experience we can gain from racing. Our Engineer’s performance is driven by racing and the need to achieve targets quickly for success.” 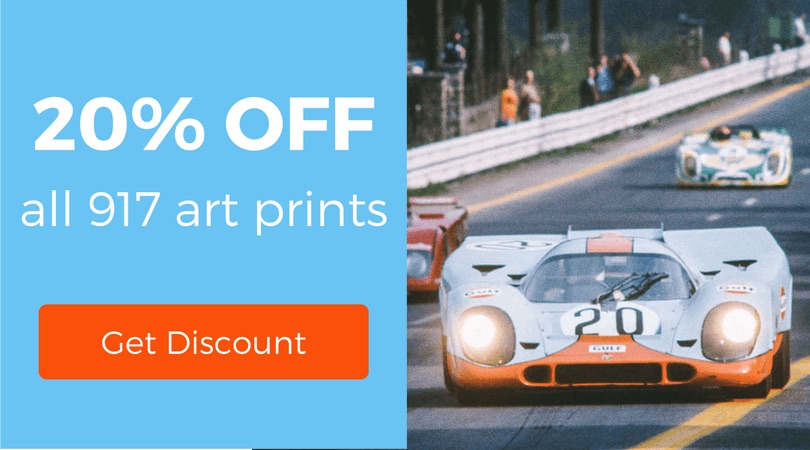 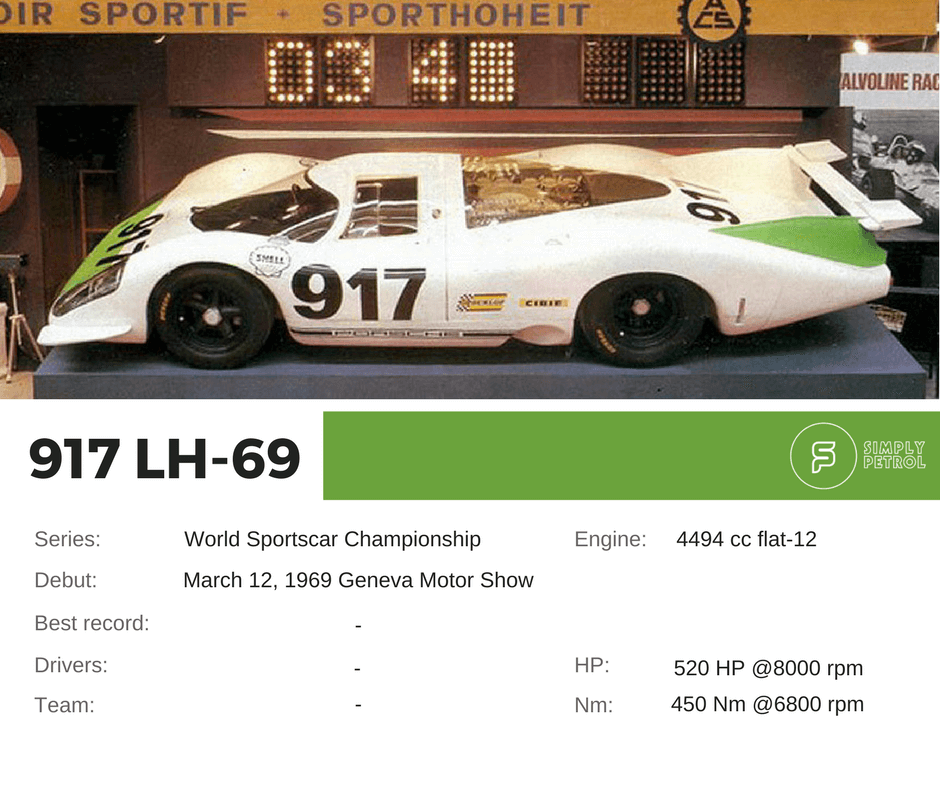 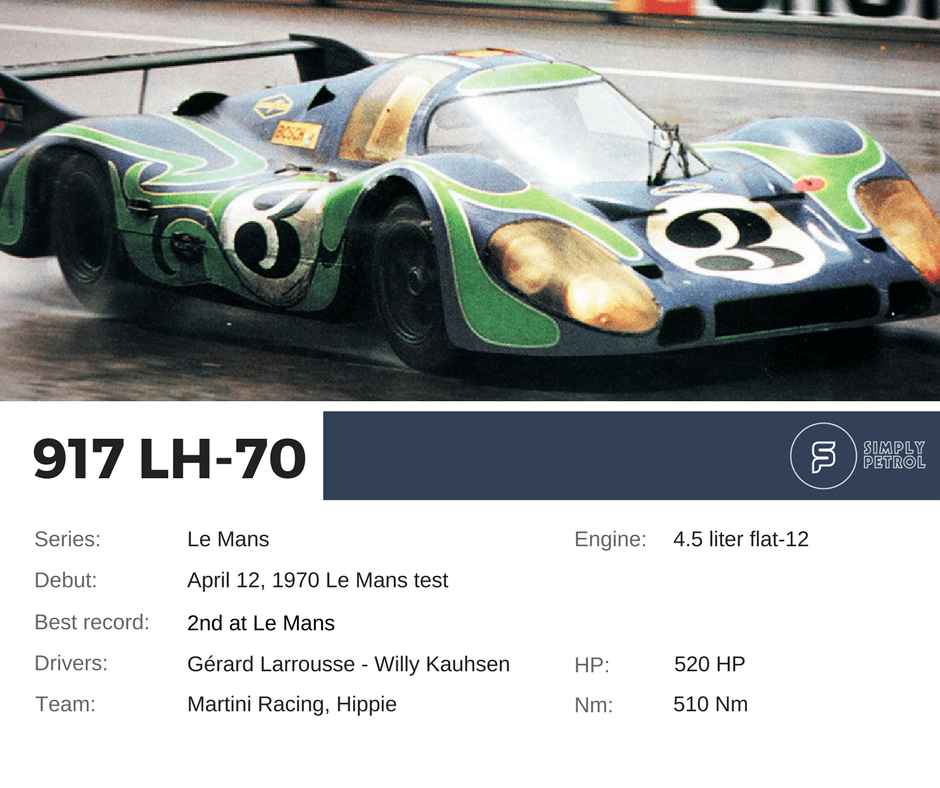 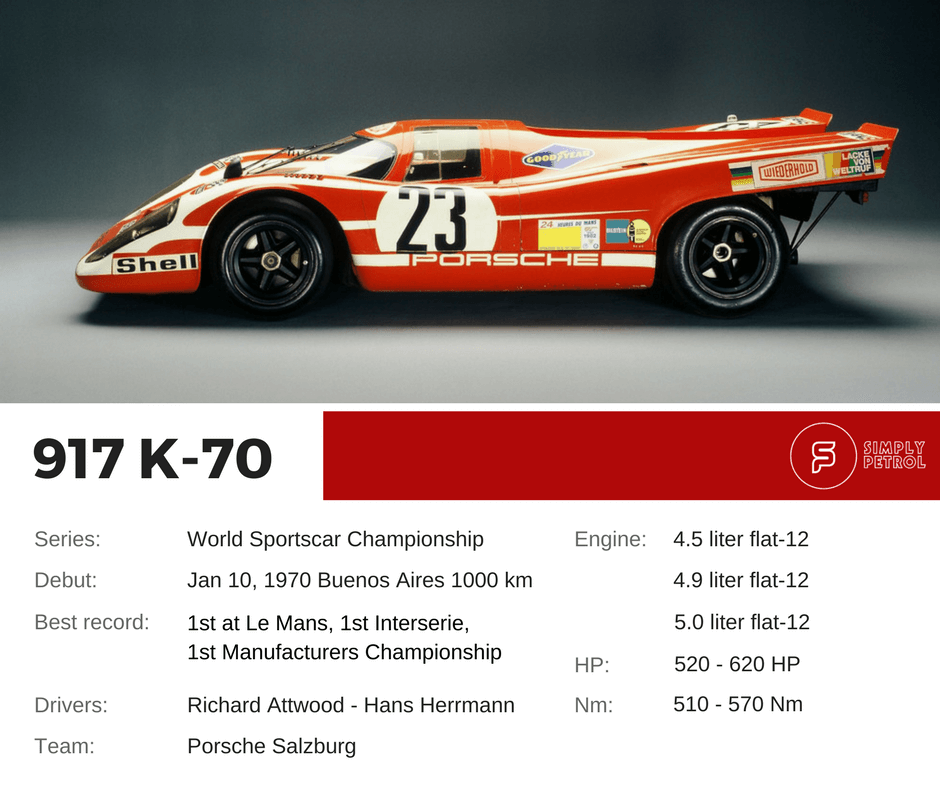 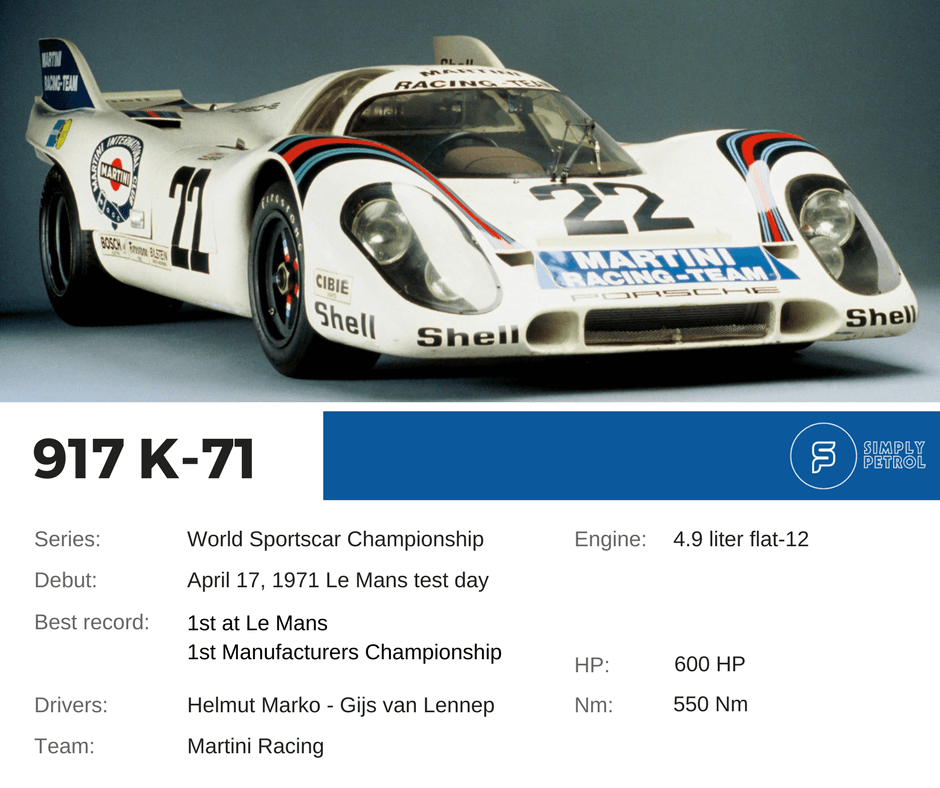 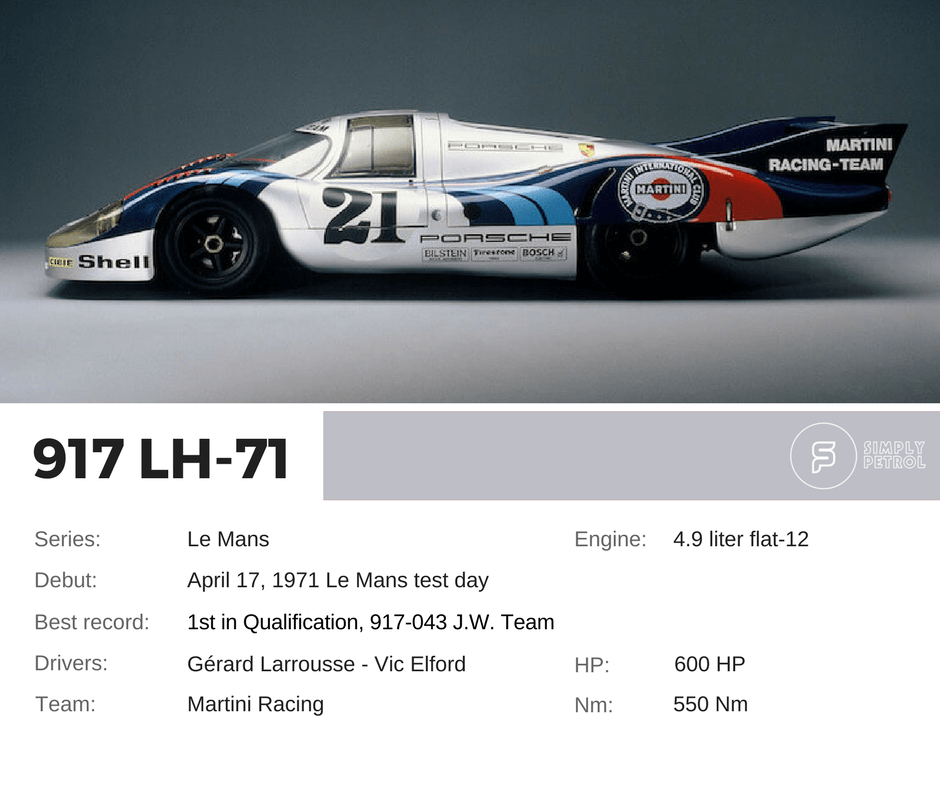 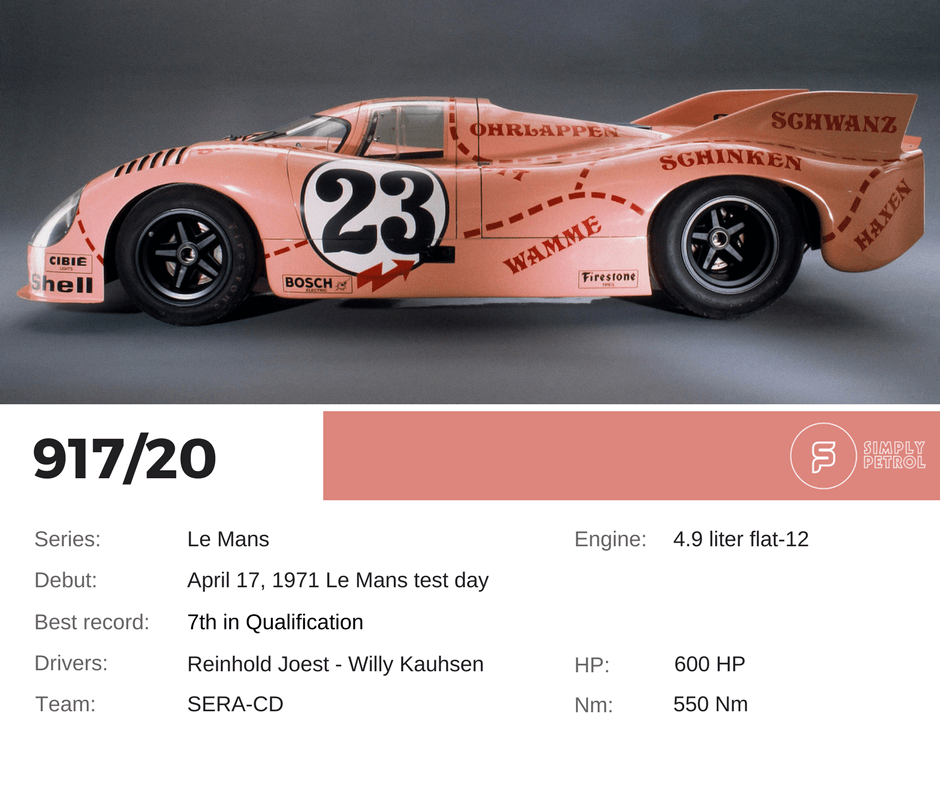