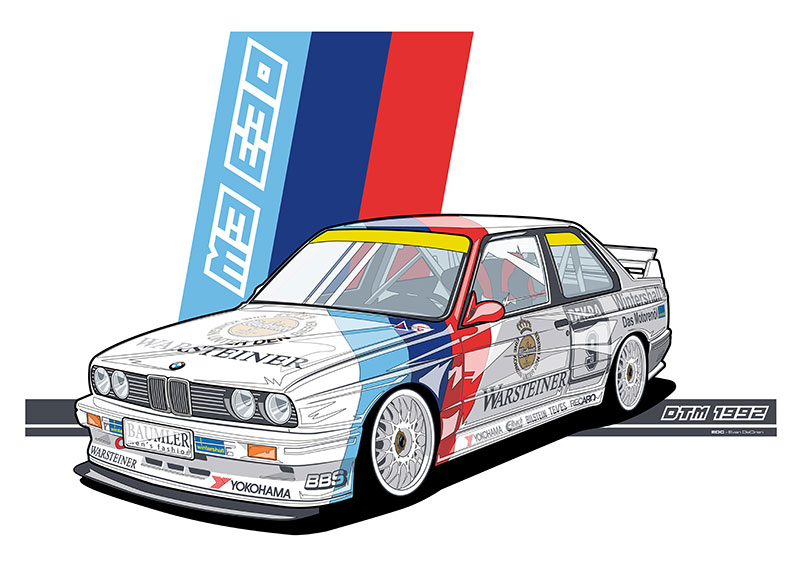 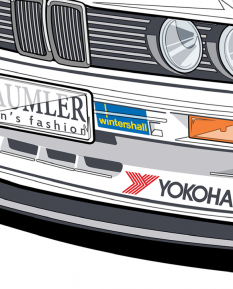 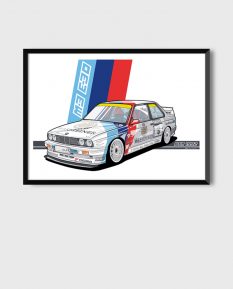 The legendary BMW Motorsports division didn’t start its existence with the M3 project. But it was that particular project, which turned them into legends. The compact BMW M3 was created as homologation of the Group A Touring car racing. And it was pretty successful in Worlds Touring championship, as well as its French, German, Australian, Italian and British editions. A sports icon was born. And this is why such BMW E30 M3 DTM poster art is a beautiful tribute to one of the most beautiful touring car ever created.

Much of the beauty of this car comes from its simplicity. It has naturally aspirated 4-cylinder engine, capable of 304 hp. Its 5-speed manual transmission was the same as this one installed in the road going M3s. The E30 M3 didn’t have any carbon-fiber components, nor the sequential gearbox we used to see in modern racing. It was simple, honest, fast and beautiful.

What you see on this beautiful poster artwork by Evan DeCiren is the final evolution of BMW E30 M3 DTM, which is arguably one of the most impressive of them all. It was so good that it successfully managed the competition of turbo powered beasts like Ford Sierra RS 500 Cosworth.

Lot of BMW enthusiasts consider BMW E30 M3 as the finest of them all. Johnny Cecotto, one of its notable drivers recently said that it is still the most beautiful Touring car in the world. Just take a look at it. Do you think is possible to argue with him? Or you have to take a second glimpse to those so-80`s boxed wheel arches holding some classic racing BBS wheels.