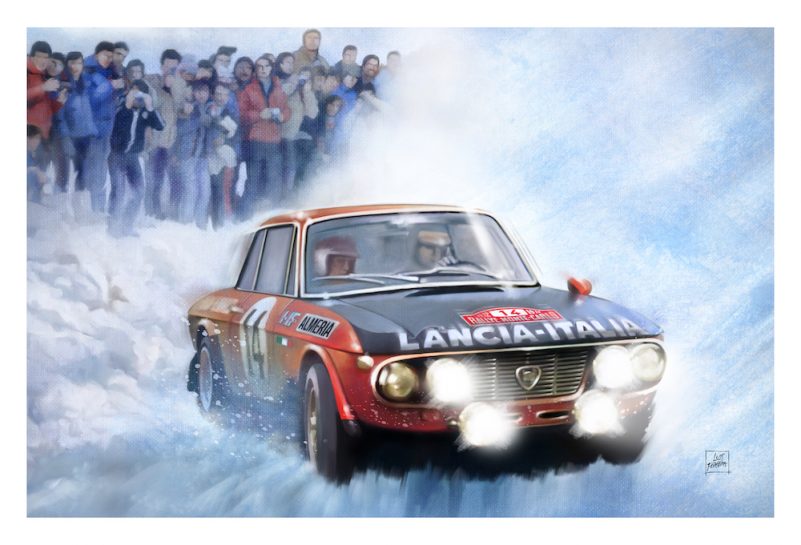 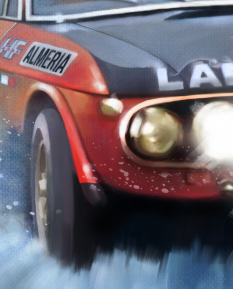 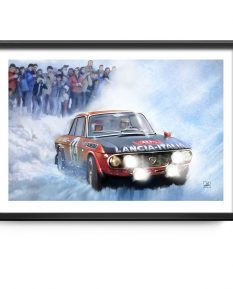 Lancia has many beautiful car models but this one stands out in a special way. Luis Ferrera's Lancia Fulvia art celebrates the car's most glorious motorsports period in 1972. This is the time when Lancia team wins the International Championship two competitions before the season's end.

Luis Ferrera depicts the epic win of Rally Monte Carlo in 1972 with Sandro Munari behind the wheel. The pilot leaves behind Gerard Larrouse and his much powerful Porsche 911 with more than ten minutes. This is Munari's first major rally win - a truly spectacular way to debut in one of the most prestigious rally events in Europe. Especially if you do it with a front-wheel-drive car.

Lancia Fulvia's body coupe is pure beauty that reminds of Ponton Mercedes design. This is the car that brings back the Italian brand into motorsports after the F1 withdrawal during the mid-'50s. The epic Lancia journey in the world of rallying begins here - the brand wins almost anything that can be won.

From a technological standpoint, Lancia Fulvia is quite interesting as well. It has a V4 engine which has always been a rare engine type. Most often Coupes and Berlinas have a 1.3-litre engine, capable of power output between 58 and 90 hp. The engine capacity is increased to 1.6 litres to match up the rally competition.

The Italians create a mass-market version of this engine to celebrate the epic rally victories of Lancia. It has 115 hp which is enough for thrilling on-road experiences. Zagato offers a beautiful 2-seater coupe with lustful fastback body.

Now you can own this beautiful Lancia Fulvia art by