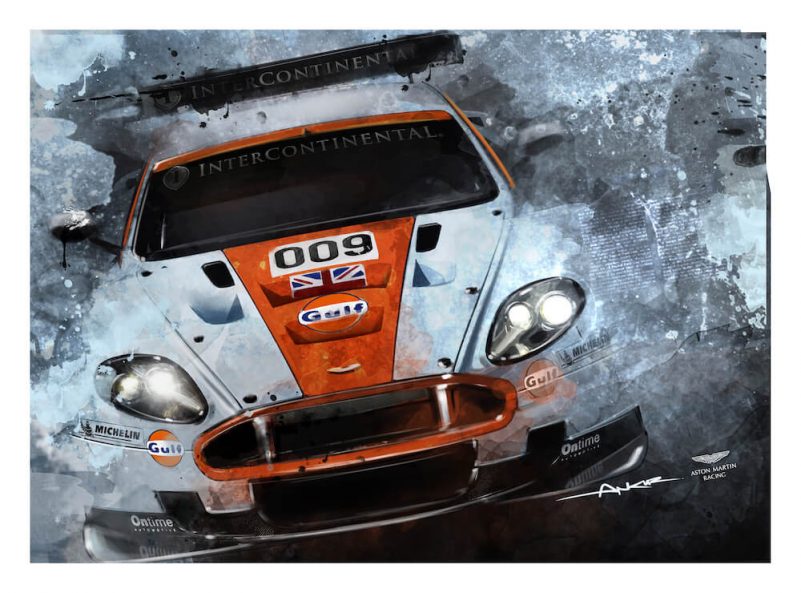 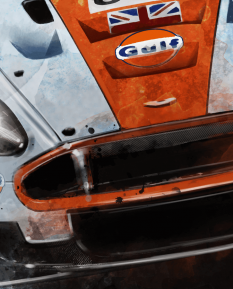 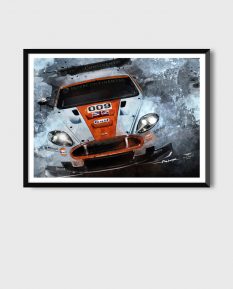 The LeMans endurance competition is a gruesome party in which only the best and the luckiest are victorious. No doubt that the Champaign bottle is not for everyone.

If you happen to be out of luck over and over again, you should be persistent to get closer to the highest podium position. This Aston Martin DBR9 art is inspired by an excellent racer chased by bad luck for two years in a row. In 2007 it finally takes the GT1 class victory at La Sarthe circuit.

Aston Martin DBR9 is the racing embodiment of the notorious Bond-machine DB9. The car is based on the stock V12 coupe with a top speed of 295 km/h. To hit the track, DBR9 gets rid of the aluminium body panels in favour of carbon fibre composite. The bottom of the car is completely flat. To optimize the rear downforce a carbon-fibre wing is added. The heart of this racing Aston retains the V12 block and the cylinder head of the stock car.

Aston Martin DBR9 debuts in 2005 when it wins the Sebring 12 Hours in the LMGT1 category. The start is very promising and the British racer becomes third at the 24 Hours of Le Mans, behind the Corvette. In 2006, the DBR9 is unable to repeat this success and finishes second behind a Corvette. In 2007, Aston Martin finally becomes victorious at Le Mans with the DBR9. All Aston Martin racers finish successfully and take the cup.

Aston Martin DBR9 #009 in Gulf livery becomes the Le Mans class winner. It is raced by the factory-backed Prodrive team Aston Martin Racing. David Brabham, Darren Turner, and Rickard Rydell are faster than anyone else in the GT1 class at Le Mans and carve their names in the motorsports history.

Artist Ankur Singh creates this smearing art print not only to revive the beauty of the famous Aston Martin DBR9 #009 in Gulf livery but also to remind how important consistency is. You can make this poster yours now at Simply Petrol.