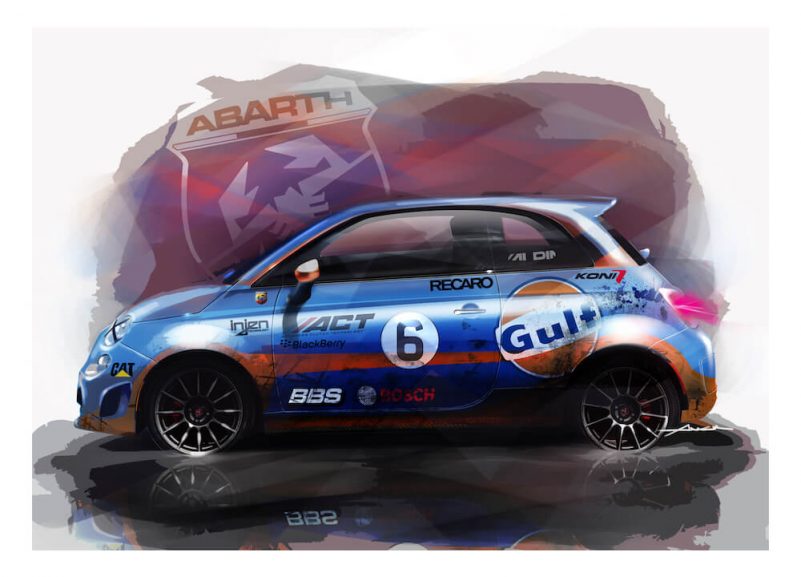 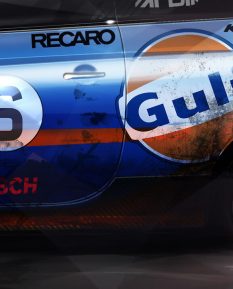 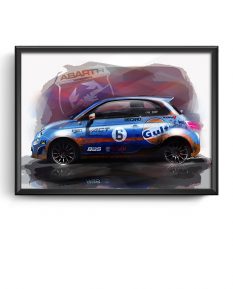 This Gulf-livered FIAT Abarth 595 art is the evidence that strong performance might come into a compact form. And such performance is more than enough for a track ready pocket rocket. Just take a look at some of the races from the Trofeo Abarth racing series and stay in awe of the brave driving and stunning skills.

FIAT Abarth 595 is pretty tricky to race and drive because its weight distribution is far of the perfect 50:50 mixture. The engine of this FWD sporty mini is hanging in front of the front wheels so the mass gravity center is leaving the rear wheels extremely self-willed, especially in fast corners.

Think of the Abarth 595 as a micro supercar. The nippy 1.4 turbo four-cylinder engine is capable of 160 hp (or 200 hp if you opt for the Assetto Corse version), while the car weight is less than a thousand kilos. With the ultimate Abarth settings, this is a definitive promise of motoring thrills.

Its engine is based on the Fire range of FIAT motorization units dating back in the mid-'80s when they were fueled by a single carburetor. With a capacity of 1368 cm3 and filled with air by turbocharger and intercooler, this compact track warrior is capable of impressive acceleration. It is hard not to love it with its rather cute look combined with aggressive aerodynamics complimented by the legendary livery of Gulf Oil.

We should not forget that the base FIAT 500 debuted in 2007 as a direct competitor to Smart ForTwo which was total hit on the Italian market because of its compact size. FIAT decided that it should take back its crown in the supermini category and the company offered a retro incarnation of the beloved Cinquecento from the 60`s. And this car became an unprecedented success.

Now you can make this FIAT Abarth 595 Gulf art yours in the form of a beautiful art print, created by Ankur Singh and carefully issued by Simply Petrol.