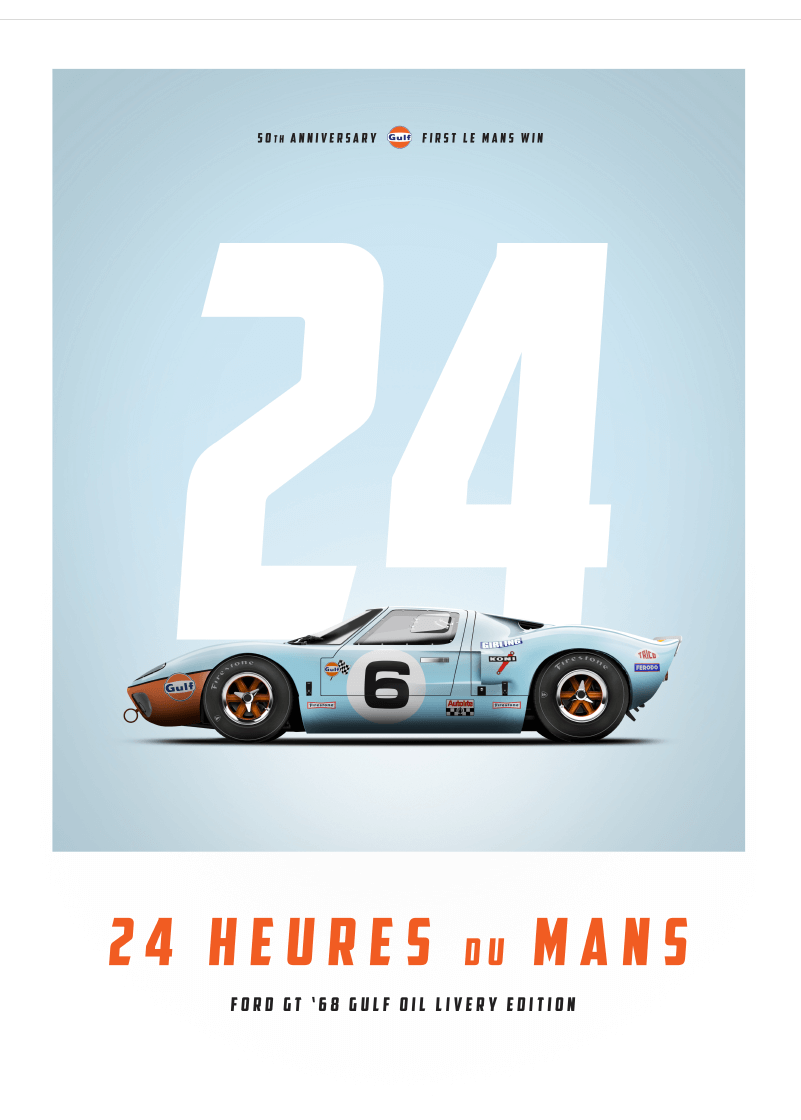 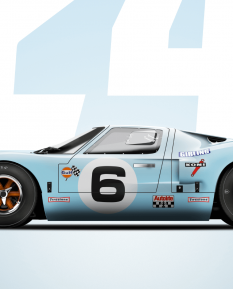 The artistic inspiration for this beautiful Ford GT40 Gulf poster comes from the 50th anniversary of the very first Le Mans winner whose sponsor is the Gulf Oil Corporation.

It happens back in 1968, just after Ford wins Le Mans in 1966 and 1967.  At that time, Ford USA decides to withdraw from sports car racing. In turn, Gulf Oil takes over the sponsorship of the newly acquired GT40 race team – J.W. Automotive Engineering. Their racing car is in the now-iconic combination of Gulf Powder Blue and Marigold Orange.

The Ford GT40 Gulf in this art print is among the very few vehicles which have won Le Mans twice. Chassis #1075 is one of the three Mirage GT40s ever built. At first Pedro Rodriguez and Lucien Bianchi take the title in 1968. A year later, in 1969 Jackie Oliver and Jacky Ickx win Le Mans in the same car leaving behind Porsche 908.

This car is the first to utilize composite materials like carbon fibre. Back in the '60s, lightweight materials are a true innovation. The first win comes in 1968 in an unusually cold and wet race. It is held in late summer due to political instability in France. Chassis #1075 holds the lead for 17 of the 24 hours and the car performs flawlessly. The next year the Belgian Jacky Ickx and the British Jackie Oliver cross the finishing line first again.

In 1969 the Belgian pilot refuses to perform the running Le Mans start, which forces pilots to lock their seat belts in motion. Earlier in the season, a British driver is killed in an accident before he has the chance to buckle up. In an act of protest, Ickx carefully straps himself before setting off.

Hang on your wall a beautiful reminder of this story with this Ford GT40 Gulf poster created by Stamatis Tsirdimos and printed by Simply Petrol.