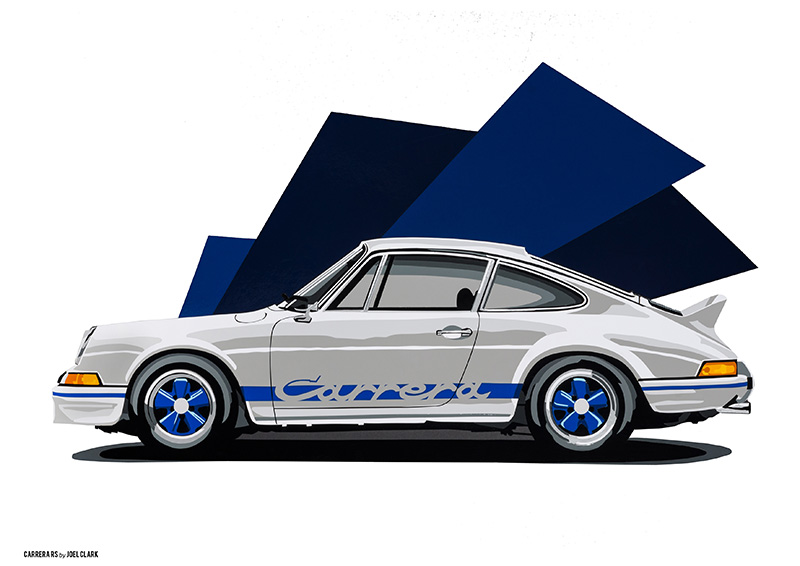 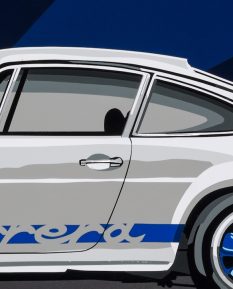 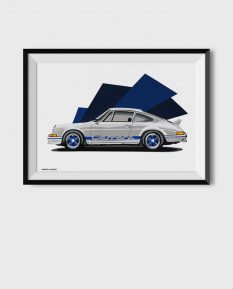 This Porsche 911 Carrera RS fine car art print is a beautiful reminder of the significance of this particular Porsche car. It tells the story of one of the most loved and desirable 911 versions.

The first Porsche 911 Carrera RS appears in 1973, just a few years after the incredibly rare 911R. The RS designation means Race Sport (or Rennsport in German) and is the first sports 911 freely available at the market. It is more powerful than 911S and has a larger, 2.7-litre engine capable of 210 hp with Bosch mechanical fuel injection. The Carrera RS stands out with larger rear wheels and fenders, stronger brakes, stiffened suspension and the now legendary ducktail rear spoiler. The car weighs just 1075 kg in Touring form and about 100 less in a Sport Lightweight edition.

Porsche produces 500 vehicles and they are just enough for FIA Group 4 homologation. The demand is high and Porsche answers by increasing the price and building 1080 more 911 Carrera RS. 49 of them have 3.0 engines producing 300 hp.

Carrera RS is the missing link between ordinary roads and the racing track so it easily becomes a legend. With an air-cooled boxer engine and Fuchs wheels, this car is the archetypal driver`s car. Probably this explains why its price hits the sky during the past few decades with a raise of 669%. It seems that the ducktail Porsche is a great investment. Only time will tell if the classic cars market is an economic bubble or is here to stay.